Romania  already has a comprehensive tax compliance requirement in place. However, from 2022 new reporting obligations will be implemented. SAF-T will become mandatory for large taxpayers.

The official  Romanian name for the SAF-T requirement is D406 Informative Declaration.

The SAF-T obligation will be implemented in phases. Initially, D406 form will have to be submitted by large taxpayers (about 3,000 entities). Other, smaller companies will be required to adapt to the new measure later (the exact timeframe has not been defined yet).

Submission of the Romanian SAF-T files is mandatory and a periodical tax requirement. The frequency of reporting is in line with VAT periods. In practice, almost all large taxpayers need to submit VAT returns on a monthly basis. Consequently, D406 Informative Declarations follow monthly reporting as well. The deadline for submitting SAF-T is the end of the month following the reporting period. However, periodical D406 files do not contain asset and stock data. These SAF-T sections need to be submitted separately. Information about assets is reported according to the deadline for the preparation of financial statements. Whereas, data about inventory movements is to be prepared and submitted upon the request of tax authorities.

Failure to comply with the obligations set forth in SAF-T will  incur penalties. In particular, the fine for non-submission of D406 file within the legal deadline could be up to 5,000 Romanian leu ($1,200). Inaccurate reporting will be penalized as well. However, the National Agency for Fiscal Administration (ANAF) has allowed a grace period of three months to comply with the new requirements. This means, submission failure or reporting mistakes in SAF-T files for January, February and March will not be fined. Still, taxpayers are required to report correctly for the January-March period latest by the end of  April 2022.

Submission of D406 files to ANAF needs to be made in PDF format with XML attached. The PDF layout looks like a tax return with standard pieces of information provided, such as taxpayer data. Whereas, the XML file contains core SAF-T data and its structure should be in line with the official, technical D406 scheme. It is expected, that the XML file is retrieved directly from taxpayer’s ERP system. When it comes to PDF creation, ANAF provides Romanian taxpayers with a special tool DUKIntegrator which enables the generation of a PDF with XML as an attachment. Additionally, it is possible to perform technical validation of the XML file using DUKIntegrator. 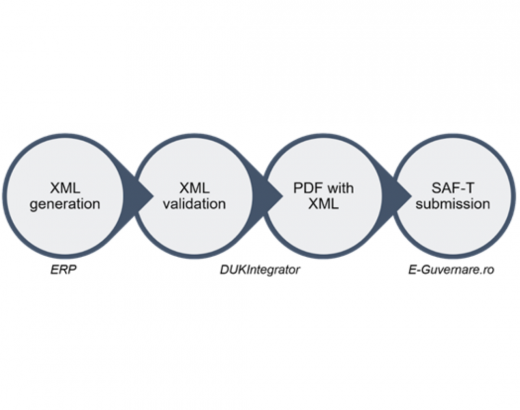 Files submitted to tax authorities need to be electronically signed using a qualified digital certificate provided by an accredited certification service provider. Exact filing of D406 Informative Declarations to ANAF is done through the portal E-Guvernare.ro. First the SAF-T file for the relevant reporting period is considered as an initial D406 return. All files that follow are considered as a correction of the already submitted SAF-T.

SAF-T Romania contains four main sections. Actual tax and accounting data are reported in General Ledger Entries and Source Documents sections. In the header, the filer is required to provide pieces of information about the taxpayer and general data about the particular SAF-T file, for example: the financial period covered in that report. Whereas, the Master Files section contains master-data from taxpayer ERP, for example: suppliers and customers’ data.

D406 Informative Declaration is a very comprehensive and detailed reporting requirement. There are hundreds of data fields, which need to be filed with actual transactional values. Moreover, many of the fields need to be filed with values only in line with the strictly defined nomenclature (dictionary). For example, there are dedicated classifications for taxes (including VAT) or for general ledger account numbering. Taxpayers are obliged to reflect those rules in SAF-T files submitted to ANAF. Therefore, it is required to perform so-called mapping of data from the company’s ERP system to D406 ones. 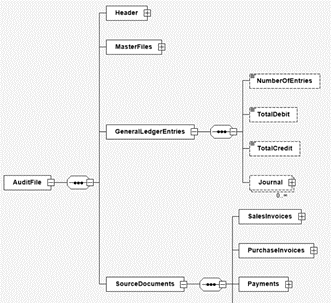 Apart from mapping, reporting core SAF-T data can  also prove to be quite challenging. The General Ledger section alone requires taxpayers to provide detailed data about each record from the journal. The Source Documents section is not any easier to complete. Periodically, companies need to provide ANAF information about their sales invoices, purchase invoices and payments. This again requires lots of details  – even up to the level of invoice lines.

ANAF has underlined several benefits of the introduction of the D406. Informative Declaration is primarily related to simplifying the interaction between taxpayers and tax authorities. Thanks to SAF-T,  tax and accounting data can be monitored electronically in an automated fashion. can be. The need for physical tax audits at company premises will be significantly reduced once the D406 comes into force.

Considering the instant controls and huge amount of data which needs to be reported to ANAF on a regular basis, the sooner taxpayers launch SAF-T implementation project, the better it would be for them. It also offers an opportunity to double-check if the ERP data is complete and verify any discrepancies which may have an impact on the accuracy of data being reported to tax authorities. In case of any gaps in IT systems, it is better to solve such issues upfront in order to avoid fines once the grace period ends.