Portugal is a pioneer in the area of digital tax solutions. It became the first country to introduce the SAF-T requirement in 2008. By introducing QR codes on invoices as of January 2022, Portugal will revolutionize the world of VAT once again.

Background of the changes

Portuguese QR codes were introduced by Law No 28/2019. Its technical specification (elaborated upon further in this text) is based on Ordinance No. 195/2020.

Apart from QR codes, there is another requirement coming into force in Portugal. From January 2022, all taxpayers will have to include the ATCUD (single document code) on their issued invoices. That is a unique code identifying an invoice. The most important part of ATCUD is the validation code, which is assigned by the Portuguese tax authorities based on invoice series (a numbering system), provided to the tax office by companies before issuing actual invoices.

QR and ATCUD codes were supposed to enter into force from January 2021. In the end, however, both requirements are postponed till January 2022. 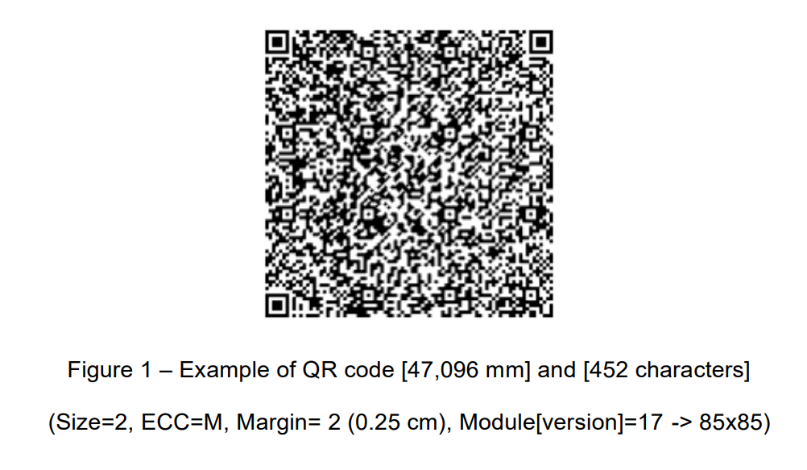 Portuguese QR codes are two-dimensional bar codes that need to be included on invoices and other tax documents issued by billing software and certified by tax authorities. Most often, that is an ERP system, such as SAP.

QR codes are at least 30mm x 30mm and need to be placed on the first or last page of an invoice (if an invoice contains more than one page). Other required technical formatting includes error correction code M, points per module 2, and a margin of  0.25 cm.

The QR code obligation is imposed on all taxpayers, including foreign entities registered for VAT purposes in Portugal. In practice, there is one situation in which providing a QR code is not necessary; namely, invoicing by EDI. However, as highlighted by the Portuguese tax authorities, whenever an image of the document is also transmitted (even in binary form), a valid QR code is mandatory. The ATCUD code is always mandatory, even in the case of EDI.

The main purpose of using QR codes is to present the message in a structured way that allows it to be processed by IT systems and receive Quick Response. The Portuguese QR code contains dozens of fields providing data about a particular invoice. Most of the fields need to be linked (or ‘mapped’) using SAF-T.

Each field is formed by combination of code (:) and description values provided by tax authorities through the QR codes’ technical specifications. Examples of QR code fields and message structure is presented in the table below. 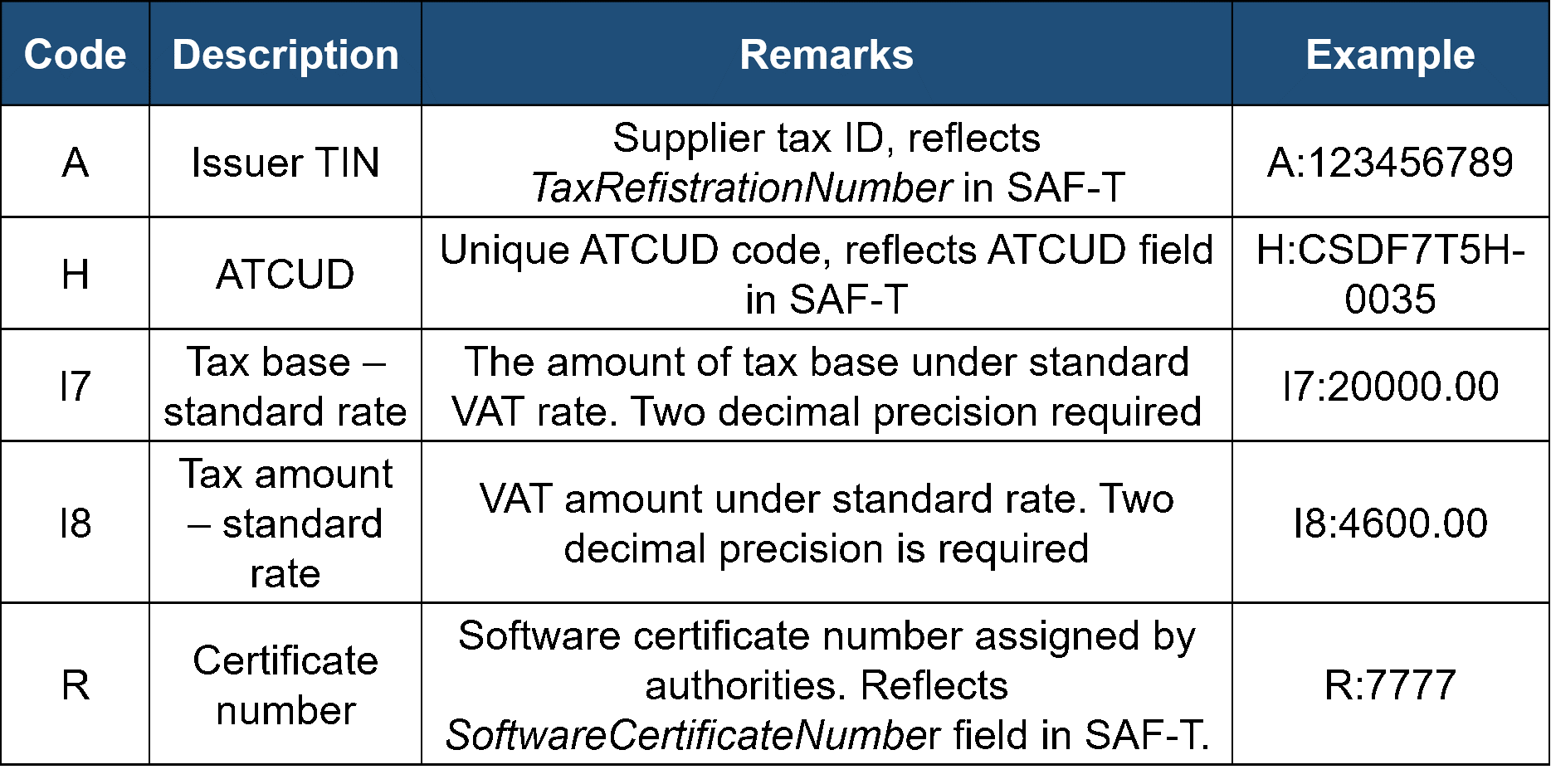 It is worth mentioning Portugal specifically when it comes to VAT rates. Portugal is one of the few countries that have different sets of VAT rates in different parts of the country. In the mainland it is 23%, 13%, and 6% rates. Madeira rates are 22%, 12% and 5%. Whereas, VAT rates applicable in the region of Azores are 18%, 9% and 4%.

Such specifics need to be reflected in the QR code message as well. There are three series fields allowing the indication of values applicable in all three regions: I1-I8, J1-J8, and K1-K8. Fields I1, J1, and K1 indicate the country region in question (PT for the mainland, PT-MA for Madeira, and PT-AC for the Azores).

Fields indicating values (tax base, tax amount) need to be presented in Euro. In case of foreign currency invoices, amounts need to be converted into euros in QR code.

When to implement? The sooner, the better.

Although the entering into force of ATCUD and QR codes has been postponed until 2022, it is worth starting implementation immediately.

Primarily, there are actually two requirements that have to be reflected in taxpayers’ ERP systems at the same time. What is more, the complexity of both requirements is high. In particular, the QR code obligation is not only an IT development. Like SAF-T, there is a lot of analysis to be done by companies because the QR code message needs to be in line with business and tax scenarios.

Also, it might even be worth considering the use of QR codes before January 2022. Portuguese tax authorities will provide special incentives for taxpayers who adapt their IT systems to the new requirement before the deadline. Taxpayers may include expenses related to QR code implementation in their income costs at a level of 130% if they start using QR codes before 30 June 2021. If they meet the deadline and implement QR codes by the end of 2021, the aforementioned benefit will be set at 120% of total expenses spent on the implementation the QR code system.