On 1st October 2020 (postponed from 1st April 2020) e-invoicing in India will no longer be voluntary for B2B transactions, having become mandatory with few exceptions. Earlier, during 35th GST Council Meeting, held on 21 June 2019 in New Delhi, the GST Council decided on the introduction of the e-invoicing mandate, which was initially optional (as of January 2020) and has now become obligatory.

The Indian approach follows the tax clearance model, in which invoices must first be presented to the tax office before the date of the transaction, and before it is communicated to the buyer. In the Indian e-invoicing process, invoices are issued by taxpayers using their own accounting software and then uploaded to the e-invoicing portal.

However, it is worth mentioning that the Indian e-invoicing system goes even further (at least further than many tax clearance e-invoicing systems) as it already allows for the transfer of the invoice (or transaction) data directly to the ANX 1 and ANX 2 (the VAT return form, earlier known as GSTR-1) and enables automated pre-population of the form. Additionally, it will deliver information and automatically fill in the e-way bill (an obligatory document for movement of goods). Such a comprehensive approach is also expected in many other jurisdictions, though it has not yet been put in place. 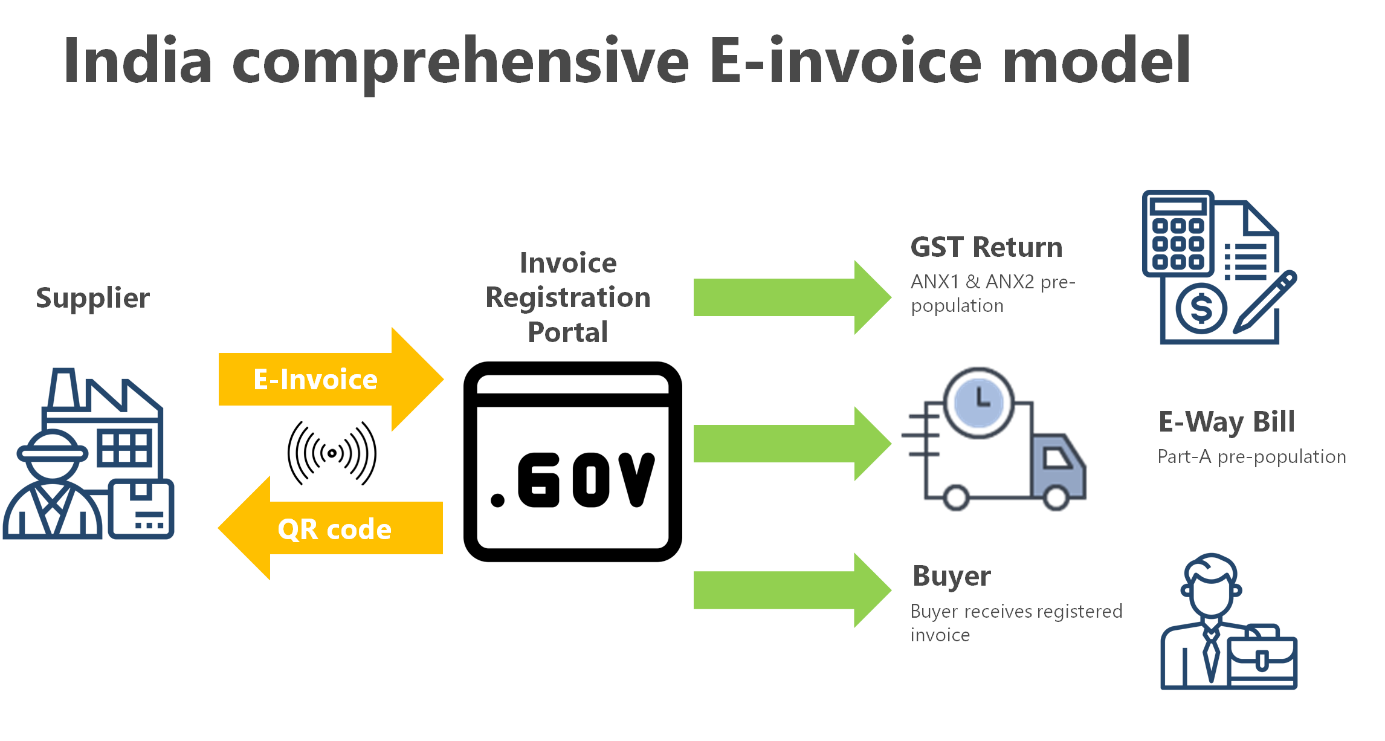 Within the framework of the Indian e-invoicing model, the key part of the whole structure is the Invoice Registration Portal through which the processing of e-invoices is realized.

The IRP constitutes an authentication tool for all electronic invoices (documents). All B2B invoices are to be diverted through the IRP, where it will be given a unique code, or Invoice Reference Number (IRN).

The IRN is generated using a hash generation algorithm (conversion of characters into numbers) and will comprise 64 digits, which are a combination of the supplier’s GSTN, document number, and the date. Based on the IRN, a QR code is generated that uniquely identifies every single invoice. It constitutes an obligatory element of the invoice that is shared with the customer and at the same time is used by the tax authorities to verify the validity of the document.

The E-invoicing obligation is intended to cover all types of invoices. Therefore all the following types of documents must be processed through the IRP:

It is important that the invoice issued by the taxpayer’s accounting software (e.g. ERP) is be compliant with the official e-invoice format (GST INV – 01) so that it is uploadable to the IRP for authorization. This means that the taxpayer has to ensure that the configuration of his ERP (accounting) system is first of all aligned with the e-invoice standard (the latest format of e-invoice schema was announced on 30 July 2020), and secondly that it enables the creation of the proper format file (JSON), which can be uploaded to the IRP.

All invoice information that lands at the IRP is further transferred from the IRP to both the GST portal and e-way bill portal in real time. Thus, it will eliminate (to certain extent) the need for manual data entry while filing VAT returns, as well as the generation of part-A of the e-way bills, as the information is passed directly by the IRP to the GST portal.

Who is obliged to issue e-invoice?

First of all, it must be noted that the e-invoicing obligation refers both to B2B and B2C transactions, although different rules apply for each of these groups.

Secondly, based on the currently binding law, it will apply to taxpayers (B2B) based on their turnover threshold. As of October 2020, the e-invoicing obligation applies to GST-registered businesses whose aggregate annual turnover exceeds Rs 500 crore.

Apart from taxpayers with lower turnover (< Rs 500 crore), there are also a few exceptions that apply irrespective of the threshold. These include special economic zone (SEZ) units, insurance, banking, financial institutions, NBFCs, GTAs, passenger transportation services, and the sale of movie tickets.

The future of e-invoicing in India

The introduction of e-invoicing in India brings a new challenge to businesses across sectors. However, these should also be viewed as a great simplification, at least compared to the decentralized tax model). Reaching this level of integration is a remarkable achievement taking into account that the harmonization of indirect taxation under GST had already been a huge effort, without which e-invoicing in India would not have been possible. Back in 2017, GST replaced multiple regional and state consumption taxes, but what is maybe even more important is the integration of tax administrations, which took place at the same time and allowed for the creation of a single-point IT interface for taxpayers, which has now become one of the most comprehensive e-tax platforms in the world.

Following successful implementation, the Indian tax administration is already building a plan to extend e-invoicing across the country. At this stage the expectation is that the next waves of the e-invoicing mandate will come into force in 2021, and will include:

In order to assess how realistic these ambitious plans are, we need to further observe the practice and how the current mandate is being managed and adhered to.