In addition to changes in the VAT treatment of goods transactions and the special status of Northern Ireland for VAT purposes, there are many other VAT consequences resulting from Brexit. The most important are those caused by the fact that UK businesses can no longer benefit from the harmonized EU VAT system. To have broader information about the VAT consequences after Brexit, our previous article might be helpful.

In this text I will discuss selected VAT compliance and administrative consequences resulting from Brexit, such as the fiscal representative requirement and the foreign VAT refund procedure for non-EU businesses.

This is the last chapter of our SNI Brexit series of four articles about the VAT implications of Brexit. In previous chapters we presented an overview of Brexit VAT changes (Chapter 1), details of VAT settlement of goods transactions (Chapter 2) and the special status of Northern Ireland (Chapter 3).

Requirement to appoint a fiscal representative

Non-EU businesses providing taxable supplies in the EU have not only to register for VAT purposes in a particular member state, but also very often have to appoint a fiscal (tax) representative in that country. A fiscal representative is an entity responsible for its client’s VAT obligations, including preparation and submission of VAT reports. Moreover, a tax representative may also be jointly and severally liable for its client’s VAT payments. Such a requirement significantly increases the cost of VAT compliance.

Appointment of a fiscal representative by non-EU businesses is required in many EU countries, for example in Austria, Denmark and Sweden. However, some member states have decided to treat the UK (non-EU country) in a special manner. For example, Poland does not require UK (or Norwegian) companies to appoint a fiscal representative. Unfortunately, businesses from the other non-EU countries must have a tax representative in Poland. A privilege similar to that offered by Poland to UK businesses is in place in other countries, for instance in Italy and in Belgium.

Although VAT is neutral for businesses, it may have significant impact on company cash flow. In particular, the standard means of settling VAT for the importation of goods requires VAT payment “at the border”. Only then it is permissible to deduct this VAT on a periodic return.

Fortunately, more and more countries have introduced the so-called postponed accounting method of import VAT calculation. To put it simply, the postponed accounting method works in a manner very similar to that of the reverse-charge mechanism. Instead of paying import VAT to tax/custom authorities, a taxpayer may recognize both output and input VAT in the same reporting period. Consequently, this method of import settlement has no impact on taxpayer cash flow. 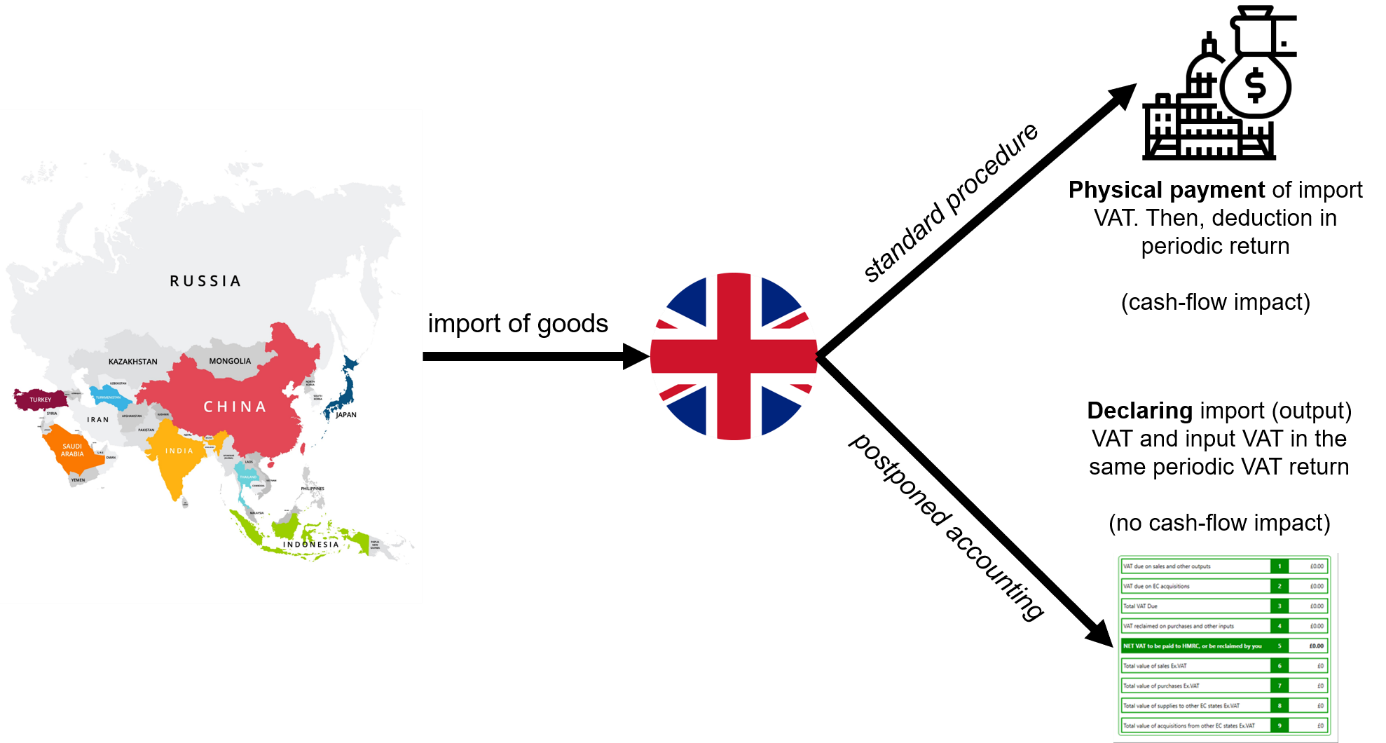 Primarily companies importing goods in the UK benefit from cashless import VAT settlement. However, many EU countries, for example Denmark, Finland, Poland, and Spain, have a similar simplified method in place. Surprisingly, postponed accounting has not yet been introduced in Germany (however some other import VAT simplifications are in place). Apart from the UK, Norway is an example of a non-EU country with postponed accounting.

There are two foreign VAT reclaiming procedures in force in the EU, commonly known as the 9th Directive and the 13th Directive. If an EU taxpayer wants a refund of VAT incurred in another EU country, he uses the 9th Directive. This procedure is user-friendly, as the taxpayer submits the request to tax authorities from their own country. For example, a German company that wants to get Italian VAT back submits the relevant form to the German tax authorities.

On the other hand, if a non-EU business wants to reclaim VAT incurred in an EU country, the applicable procedure is the 13th Directive, which is much more complex. First, a refund request must be submitted to the tax authorities from the country in which VAT was incurred. For instance, if a UK (non-EU) taxpayer wants a refund of Swedish VAT he needs to submit an application to the Swedish tax authorities.

However, it seems that Northern Ireland businesses will be able to rely on the 9th Directive as they are considered to be part of the EU VAT union.

Surprisingly, although Intrastat is an EU report, it will still have to be completed by UK companies until the end of 2021. What is important is that only the arrival (import, from the UK perspective) part will be applicable. Northern Ireland businesses need to report on the full scope of Intrastat.

Last but not least, it is worth underlining that a new means of VAT reporting triggers a number of changes in IT systems. For example, supply to/acquisition from the UK most probably needs to be mapped to different tax codes and VAT return boxes. It appears that master data in ERP systems must be updated as well, because, for example, business partners from Northern Ireland have the new VAT ID prefix XI.