When considering global milestones in VAT development, one definitely cannot overlook the introduction of VAT in the Gulf region. In light of the fall in oil prices, Gulf countries have been looking for other sources of revenue. The introduction of VAT was found to be a suitable measure that could meet the demands of local governments by generating large revenues. This is probably not much of a surprise, since indirect taxation has been a well-known and effective tool of financial policy across the globe.

The Gulf Cooperation Council (GCC) took a critical step back in June 2016, when it enforced regulations to launch the process of implementing its VAT regime across the six countries forming the GCC, namely, the United Arab Emirates (UAE), the Kingdom of Saudi Arabia (KSA), the Sultanate of Oman, Qatar, Kuwait, and the Kingdom of Bahrain. The implementation was based on the Common VAT Agreement signed by all six states.

The process is still pending, three years after the first implementation. The below table presents the current state of play. However, the expected dates of introduction for Qatar and Kuwait may still be subject to change (having observed the delays experienced by other countries, combined with a dynamic pandemic situation). 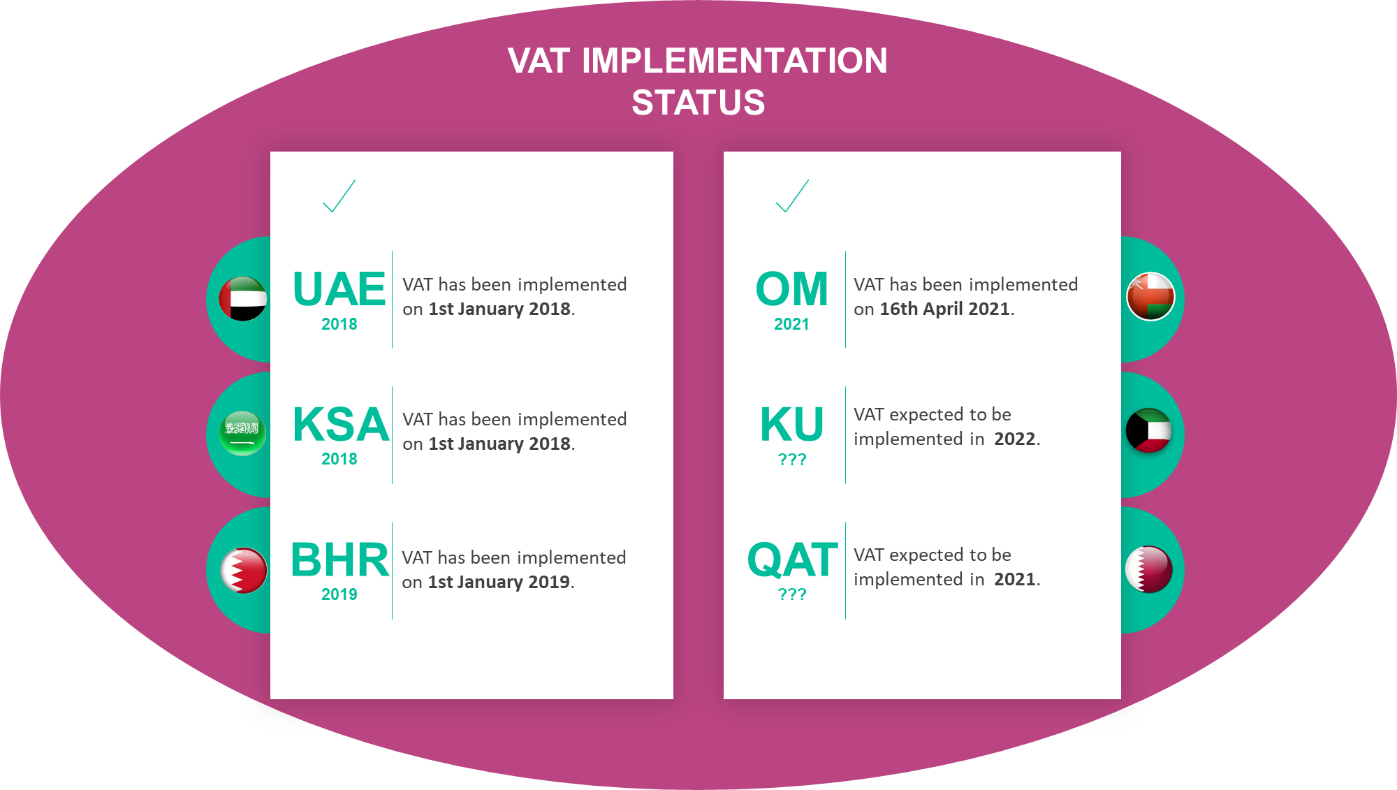 The UAE and KSA were the first two countries to introduce VAT back on 1 January 2018, marking the beginning of a completely new chapter in the history of VAT in the Middle East. The implementation process had been very hectic as the final regulations were released in the fourth quarter of 2017, leaving taxpayers little time to prepare. The situation proved even more demanding given that VAT was a completely new requirement that did not previously exist anywhere in the GCC. Still, a final assessment of the implementation in these two regions is positive, and concludes that the program was established on time. This may also have been an argument for the governments of Bahrain and Oman to start their own implementation processes.

As announced by the GCC back in 2016, it was expected that VAT legislation across the GCC region would reflect the EU’s system. Indeed, after more than three years since the first implementation, we can now really see that it is very much based, if not copied, from EU VAT Directive (112/2006/EC). Still, there are a few areas where the GCC model does not follow its European ancestor.

The Common VAT Agreement approved and signed by all GCC member countries constitutes the foundation of the VAT concept, which was supposed to be introduced by all six GCC jurisdictions. Its role and legislative force recall that of EU VAT Directive, building as it does on the general framework of the VAT model for the member states. Member states are therefore obligated to implement the VAT rules in their jurisdictions in line with the rules laid down by the Common VAT Agreement. It contains the basic concepts of taxation, including the mechanism of calculation, scope of taxation, rates, exemptions, and rules governing intra-GCC trade. At this stage, the GCC’s main objective is to apply and execute VAT rules at the level of transactions performed locally (by domestic supplies) in order to build awareness and ensure a steady pipeline of revenue.

Looking at the principles adopted by the EU and the GCC, it may be concluded that the GCC learnt its lesson from the EU’s 50+ years of experience in VAT application. In all fundamental VAT aspects, the GCC model follows the EU model. 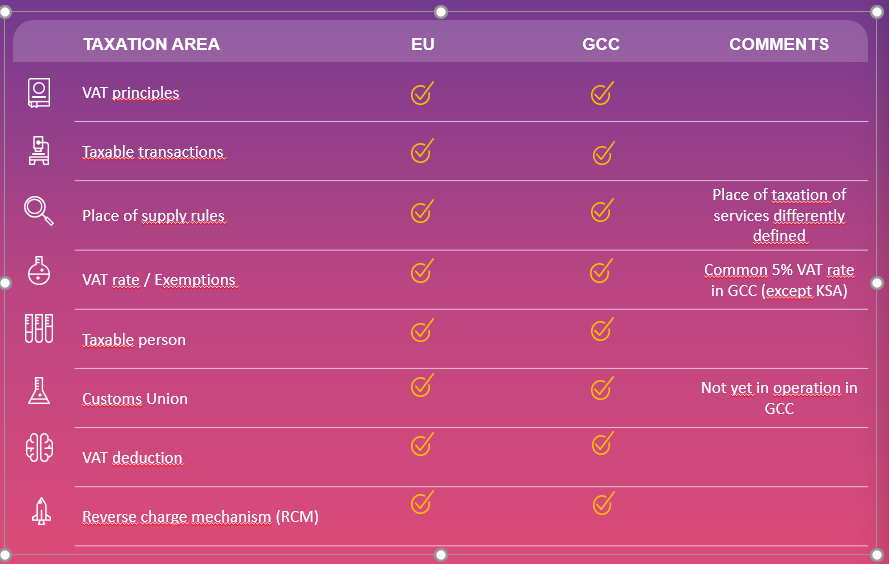 In all elements of VAT, EU and GCC regulations are aligned, and only slight differences are noticeable, including those pertaining to registration thresholds, date of supply of goods, and non-deductible expenses. GCC governments are also facing similar challenges when it comes to VAT application, including composite supplies, deductibility, advance payments, leasing contracts, and exemption applications.

With 27 different models for VAT reporting, GCC governments seem to be following straightforward compliance requirements, given that the implemented VAT return forms resemble those of the Netherlands or Ireland. There are limited numbers of boxes, however, GCC countries also have their own unique characteristics; for example, the UAE’s need to split local sales between its seven constituent emirates.

It is also worth mentioning that GCC countries not only took advantage of a well-tested system, while keeping up the pace of digitalisation (for example, e-invoicing and e-commerce taxation) and VAT compliance trends (SAF-T requirements, electronic registration, and submission procedures).

We can now see that the implementation of the VAT law in the GCC region is progressing, and is rapidly approaching the goal of getting all six GCC jurisdictions under a single VAT regime. In April 2021 the majority of member states introduced VAT.

At this stage there are at least two interesting elements worth noting. While the initial plan was to impose a 5% VAT rate, the KSA made an unprecedented move by hiking the rate up to 15%. It is predicted that other states might also follow this direction, depending on their domestic and international economic positions.

Another one is the common GCC market. With the GCC being close to the destination model, it will be interesting to see whether the customs union and intra-GCC transactions can work together, or whether their will bring similar challenges as intra-community supplies did to the EU.

Having said that, we are looking forward to the Qatari and Kuwaiti governments completing the implementation and closing this challenging chapter.